Who am I and what am I all about? 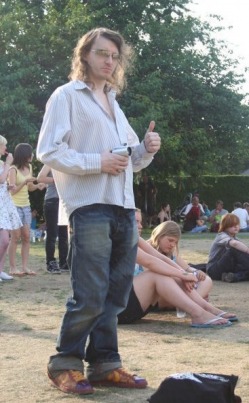 Photo by Heather Wilson
The mist, the whisper that runs any day in your mind, 'Who are you really, wanderer?' And the answer you have to give, no matter how dark and cold the world around you is...
maybe, I'm a King.
~
There was a point a few years ago when I was reading various autobiographies by musicians when I had the idea: What if I made it and someone wrote a book about me? What would be in it?" I'm sure you'll agree 'Chapter 5: David went to work, came home, watched TV, had some dinner and went to bed' isn't very rock n' roll. So I set fire to my television and from that point on I started saying yes to pretty much everything and involving myself in all sorts of crazy adventures.

So yes, who is this lovable rogue? First off, I'd like to point out that I don't actually think that I'm a King or that I rule over anyone. King Dave was a name given to me years ago by some lass at the Sesiwn Fawr festival in Dolgellau, North Wales. I liked it, got home, set it as my MySpace screen name and when I got a Facebook account years later I just used that name again. Then, people started calling me it online, then in real life and it just stuck.

I slaved away for years under the thankless taskmasters at a popular supermarket where every little hurts and saved up £10,000 to spend on a deposit for a mortgage on a nice house but when I made it to Worcester on 1st January 2008 I ended up moving into The Porch, which, if you know, you know, ya know, and if so then keep that on the low though, cause ain't no-one supposed to know, yo. It was all very hedonistic and I ended up spending the next 3 years partying every single penny away, and then some; credit cards, oh hello! The plus side of this is that I've been to at least 1 gig a day, every single day of the week for 4 years now; and counting. I've filmed them all (more details can be found on this page) and to be fair, my life has been nuts. I can't imagine not being involved in music, whether it's filming bands, promoting gigs, making albums or any of the other stuff that living this life involves.

Nowadays I run a small record label, King Dave Records, which is more of a promotions platform for all the artists and musicians that I've met on my travels. I've got two artists on the books at the moment with a few more that I've got my eye on.
I'm incredibly passionate about music and do everything I can to spread the word about local bands and singer/songwriters via live videos that I film for them.

I do this all day everyday. I haven't got a regular daytime job and then a bit of excitement some evenings, it's just this full on and non-stop but I wouldn't change a thing. Even if I never make it, I've been told that I already have so what a life to live! This is my story...
google37c086edef57ff8b.html