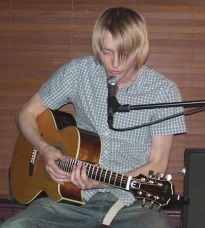 Recently I was asked to help with a video shoot for Howard's upcoming single 'Good Fortune' at The Firefly in Worcester on Sunday 13th September. I got there a bit late as there were three other gigs on that day but still managed to catch Richard Clarke's set, had a brief chat with Howard and Nev and it was straight on with the performance/recording.

Howard's set was breathtaking as always and the audience was really respectful. Me and Nev filmed the whole thing, Willis from the Task In Hand recorded the sound and Dave Draper mastered it, then Nev edited it all together into the lovely video you see below. Make yourself a cuppa, watch this on full screen and you can't help but be taken on a little journey.