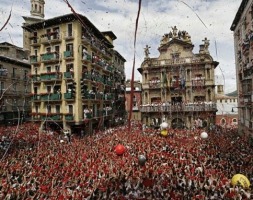 In July of this year I flew to Barcelona to then make my way to Pamplona for the world famous Fiesta de San Fermin. I landed in Barcelona at midnight, again with nowhere to stay & not knowing where to go so I headed off on foot in the best looking direction and spent the next 8 hours walking across a desert accompanied only by a tropical storm. I eventually ended up in the city & found a beautiful park full of palm trees and lavender.  Had one of the smallest coffees I've ever seen in a local cafe and realised my Spanish wasn't as good as I thought. Went exploring and found the Place d'Espagna & then the Palau Nacional: Museum of National Art Catalunya. 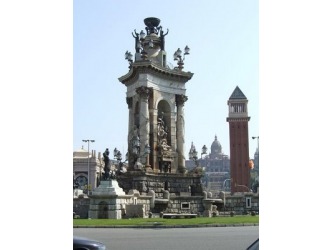 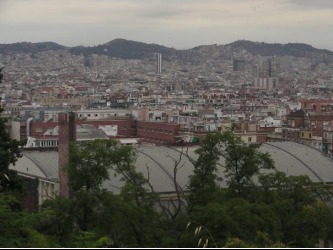 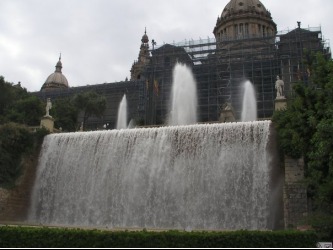 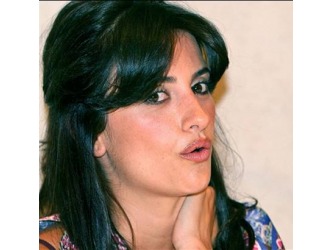 Day 6 - Sunday 12th July 09
Woke up by a river, sweating like crazy in the direct Spanish sunlight with a policeman on a silly looking moped giving me a proper ticking off for having a tent. He copied some details out of my passport and rode off. Intense. Had a sort through my stuff and headed off in search of adventure. Found the café where I'd drunkenly left my tent and got that back. I wanted to find the bar where I'd got the kangeroo burgers so walked for ages. Saw the Beyonnaise orcestra performing in del Plaza de Cruz, got a Kalimotxo and watched their beautiful performance.

Found an internet café across the road so went in to charge my camera and ended up talking to James who invited me to Malaga. Went walking and found more street artists and a concert in del Plaza de Castille. Followed two marching bands down several alleys and found the Australian bar and had a kangeroo burger with more kalimotxo and laughed at Australian tourists being drunk and rowdy and falling off tables. Went and watched the fireworks display and filmed Las Rancheras del Mariachi Internacional del Mexico in a park, followed by Native American Indians playing panpipes and dancing. Found an outside bar that sold kalimotxo for only €2 and filmed a really cool band in a park. Brought a San Fermin t-shirt and picked up a nice watch. Chilled out on the Castille walls overlooking the city. Went to the Plaza del Castille and filmed some silly Euro-pop band with even sillier dancing before heading out into the woods to get some sleep at 4am.

Day 7 - Monday 13th July 09
Was woken up by a park official warning me he was about to switch the sprinklers on. Had a wash in a fountain and went in search of a decent internet café. Did some shopping to make my own Kalimotxo, conversed with the locals and ended up in the centre of town and had a siesta in a park for a few hours. Woke up sunburnt and went off exploring. Stopped at a horrible café and got well over-charged for a cola and internet access which didn't work properly, but did read a newspaper with a picture of a guy getting stabbed in the face by a bull's horn on the front page. El terror! Found a bar with english speaking staff, so got directions to the Tourist Information Centre, had a chocolate milkshake and wrote out some postcards. Walked into town and found the coach station so I can to Malaga. Found some live music and danced like no-one was looking to some really cheesy covers. Watched the fireworks in the central plaza then returned to the Australian bar and got another kangaroo burger. The beautiful barmaid that I had my eye on told me that she thought my small handwriting was really pretty, I told her I thought the same about her and she blushed and giggled. It's amazing how flirting crosses the language barrier. Got lost (in music) and spent ages wandering around before eventually finding a party to join at 4am.

Day 8 - Tuesday 14th July 09
Had a ham sandwich and another wash in a fountain. Went to Red but still no word from Lucretia. They closed for a siesta so I went to the coach station and saw the 'Farewell to the Giants and Big Heads' show. Brought a ticket to Madrid and went for a final spot of sunbathing in de Plaza de los Fueros. I got on the bus with my daysaver, drank Kalimotxo in the corner and went through several beautiful rustic tradition towns and the lands of the Cid. Many, many mountains later I arrived in Madrid and got throughly confused by the Metro system as out of all the lines, trains and stations available the one I needed was the only one that was suspended! Eventually found way to Méndez Advaro and the terminal was closed. Had a brief siesta outside til 1am and then went to explore Madrid. Found a bar and had a couple of café caliachio's and read a few Spanish newpapers which I was pleasantly surprised about. They closed at 2am but I found another open bar so kept on drinking.
google37c086edef57ff8b.html